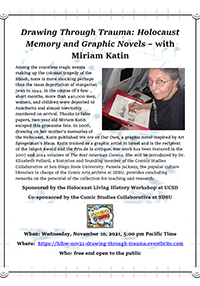 Drawing Through Trauma: Memory and Graphic Novels with Miriam Katin

Among the countless tragic events making up the colossal tragedy of the Shoah, none is more shocking perhaps than the mass deportation of Hungarian Jews in 1944. In the course of a few short months, more than 440,000 men, women, and children were deported to Auschwitz and almost inevitably murdered on arrival. Thanks to false papers, two-year old Miriam Katin escaped this gruesome fate. In 2006, drawing on her mother’s memories of the Holocaust, Katin published We Are on Our Own, a graphic novel inspired by Art Spiegelman’s Maus. Katin trained as a graphic artist in Israel and is the recipient of the Inkpot Award and the Prix de la critique. Her work has been featured in the 2007 and 2014 volumes of The Best American Comics. She will be introduced by Dr. Elizabeth Pollard, a historian and founding member of the Comics Studies Collaborative at San Diego State University. Pamela Jackson, the popular culture librarian in charge of the Comic Arts archive at SDSU, provides concluding remarks on the potential of the collection for teaching and research.

Co-sponsored with the Holocaust Living History Workshop at UCSD

Brief showcase of treasures from the SDSU Library Comic Arts Collection, followed by a ribbon cutting and presentation to the donor. 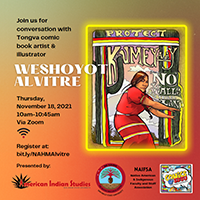 Weshoyot Alvitre is a Tongva (Los Angeles Basin) and Scottish comic book artist and illustrator.  Weshoyot has been working in the comics medium for over 15 years and has since contributed to numerous Eisner award-winning books, including the “Umbrella Academy” (Darkhorse Comics), “Little Nemo: Dream Another Dream” (Locust Moon Press) and "Little Bird" (Image Comics).

The Asian-American Artist and the Post-Racial Mountain-as-Molehill 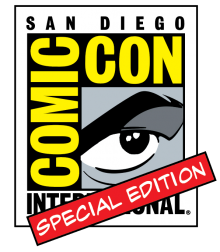 The past few years have represented a sea change in how people engage with their communities, with vital exercises of First Amendment rights in protests and the art that rises around them. As with many artistic endeavors, civic engagement has been an integral part of comics since the format’s origin, addressing issues as diverse as women’s rights, civil rights, LGBTQ+ representation, antiracism, and so much more. Panelists explore how comics have been used to address social and political issues in the past and how contemporary creators and educators are using comics to engage the community. Betsy Gomez (Comic Book Legal Defense Fund), Elizabeth Pollard (Professor of History, SDSU) and Pamela Jackson (Comic Arts Curator, SDSU Library), Jordan Smith (CBLDF).

[email protected] is a grass-roots cross-college initiative whose goal is to cultivate innovative teaching, pursue transformative research, and foster vibrant community interaction, especially with regard to the unique power of the comics medium to bring about social change. This panel screens a short film that highlights the work of [email protected]’s Comics and Social Justice Initiative. Following that screening, moderator Beth Pollard (SDSU) reflects on the goals of the Initiative as well as the scholarship and opportunities for student learning and research that the Initiative fosters. Pamela Jackson (SDSU Special Collections) discusses the role of the SDSU Library’s comics collection in supporting this Initiative and in making connections with the wider community. Neil Kendricks (SDSU School of Art + Design) and William Nericcio (Amatl Comix) share their perspectives on the Initiative. Fawaz Qashat (SDSU) explains the importance of comics courses and the Initiative to his undergraduate SDSU experience.

Voice Actor in numerous Anime series will be discussing the creation process and working as a voice actor with History 157.

Black Representation in the World of Animation

Generations of children and youth have spent many hours reading comics, traveling to far away lands, feeding their fascination for superheroes, and learning about people much like themselves facing real-life issues.

They believe the study of comics can bring transformational experiences that advocate for social justice, imagine audacious solutions to seemingly unsolvable problems, and promote the idea that individuals can make a difference. The SDSU Library curates a large collection of comics that will serve as an innovative resource for teaching and research. 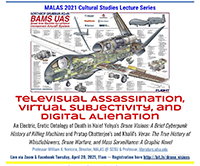 You and your students are invited to a multimedia presentation focused on the groundbreaking work of Mexican cultural critic Naief Yehya (Drone Visions, Hyperbole Books) and Sri Lankan journalist Pratap Chatterjee & Algerian American cartoonist Khalil Bendib (Verax, Metropolitan Books). Both works reveal a world of technology, surveillance, and ethics spinning out of control. Never before have  drone technologies advanced so far—we’ve arrived at the point where annihilation and murder by remote control runs the risk of turning all of us into erasable ratios.  Once imagined as a safe way to save the lives of pilots, drones, like the wretched  Frankenstein monster Mary Shelley imagined, now run amok, making the spectre of collateral damage a way of life (and death) and establishing a voyeuristic economy of violence whose mark will not soon be erased.

Born in Queens and raised on Long Island in Huntington, NY, Jonathan moved west to southern California with his family at the age of 12. He soon had his first talent agent in Hollywood and was a child actor auditioning for hundreds of commercials, TV shows, movie parts, and performing thru his high school years in Huntington Beach. After earning a degree in Acting/Directing from Long Beach State, he moved his talents up to L.A. to pursue his dreams in show biz full time. His wife Jennie, also an actor/writer, and he have two sons, Harry and Sammy.

As a voice over artist, Jonathan has appeared in hundreds of projects on Cartoon Network, MTV, Netflix, Hulu, Amazon Prime, ABC, FOX, Disney, and other platforms for animation, live action, and video games. Most notably, as Shikaku Nara on Naruto, Ricky on LEGO Friends, Miles on Cowboy Bebop, and as Hibiki Kanzaki on the groundbreaking Macross II series. Other credits include Digimon, Forest of Piano, Better Than Us, The Seven Deadly Sins, Mob Psycho 100, HunterxHunter, and many others.

Jonathan has also worked extensively as an award-winning actor, director, writer, and producer for film, TV, and stage. His new indie quarantine inspired web series, "5-Star Weekend", a collaboration with his wife, is currently streaming episodes on YouTube.

History and Comics - A Conversation with Billy Grove and Frank Quitely

Laurence Grove, author of Comic Invention: The World’s First Comic, Everything Before, After – Frank Quitely, is a Professor of French and Text/Image Studies and Director of the Stirling Maxwell Centre at  the University of Glasgow.  Rank Quitely is a four-time Eisner Award winner and DC comic artist (including such titles as New X-Men, All-Star Superman, and Batman and Robin). Join them for a conversation about history, and comics, and the history of comics… and much more! 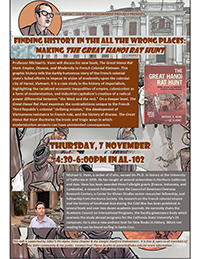 Find History in All the Wrong Places: Making The Great Hanoi Rat Hunt

Professor Michael G. Vann will discuss his new book, The Great Hanoi Rat Hunt: Empire, Disease, and Modernity in French Colonial Vietnam. This graphic history tells the darkly humorous story of the French colonial state's failed efforts to impose its vision of modernity upon the colonial city of Hanoi, Vietnam. It is a case study in the history of imperialism, highlighting the racialized economic inequalities of empire, colonization as a form of modernization, and industrial capitalism's creation of a radical power differential between "the West and the rest." On a deeper level, The Great Hanoi Rat Hunt examines the contradictions unique to the French Third Republic's colonial "civilizing mission," the development of Vietnamese resistance to French rule, and the history of disease. The Great Hanoi Rat Hunt illustrates the ironic and tragic ways in which modernization projects can have unintended consequences.

Michael G. Vann, a native of O’ahu, earned his Ph.D. in history at the University of California in 1999. He has taught at several universities in Northern California and Asia. Vann has been awarded three Fulbright grants (France, Indonesia, and Cambodia), a research fellowship from the Council of American Overseas Research Centers, a Center for Khmer Studies senior researcher fellowship, and fellowship from the Korea Society. His research on the French colonial empire and the history of Southeast Asia during the Cold War has been published in several book and over two dozen academic journals. He currently chairs the Academic Council on International Programs, the faculty governance body which oversees the study abroad programs for the California State University’s 23 campuses. He is also a new podcast host for New Books in History. When not reading he can be found surfing in Santa Cruz.