Episode 4 of WandaVision came as a surprise to everyone when we saw that it was not a sitcom style episode, but rather a short MCU movie style episode to explain to fans what everything means so far in the Westview anomaly. This, however, did not deplete the references and Easter eggs marvel placed for readers of the comics. To start off, S.W.O.R.D. in the MCU stands for Sentient Weapon Observation and Response Division. In the comics, it stood for Sentient World Observation and Response Department. Although only two words differ, this changes the focus of the entire group. Whereas in the comics they dealt with different planets and universes, the MCU adaptation shifted the focus to weapons of all kinds. From the infinity gauntlet to Stark’s array of armors and gadgets to even the Vision! 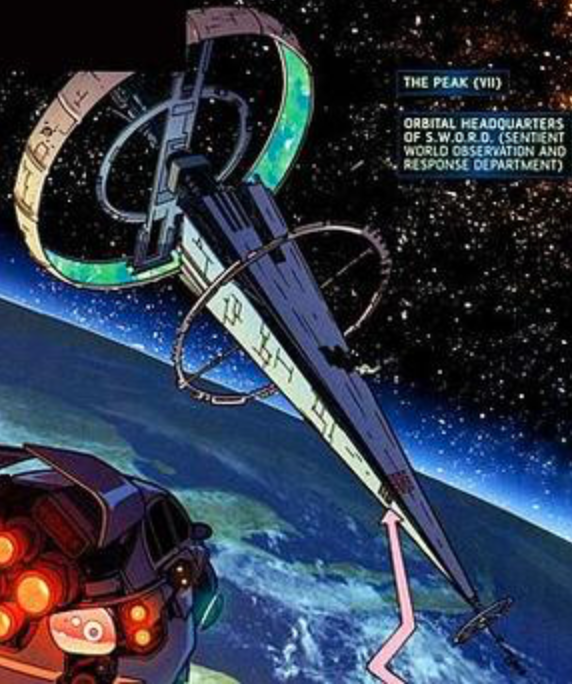 The Peak, headquarters of S.W.O.R.D.
Art by Steve Sanders.

Later on, as Monica Rambeau is going back to work at S.W.O.R.D., we can see a plaque with her mother’s image on it that reads, “Maria ‘Photon’ Rambeau.” This is a reference to Monica in the comics who goes by Photon as her superhero name. This could be a way to allow Monica to adopt the name which represented her mother in the future when she joins the Avengers. 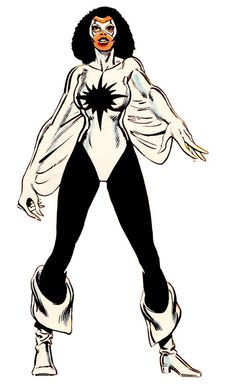 Image of Monica Rambeau from the Marvel Database

The location of Westview being in the state of New Jersey is a direct reference to the comic series Vision and the Scarlet Witch (1985) by Steve Englehart. In that comic series, Wanda and Vision live in a town called Leonia which is also in New Jersey. Even though the name of the town differs, having its state be the same was a nice way to give a little Easter egg for the fans of the comics. 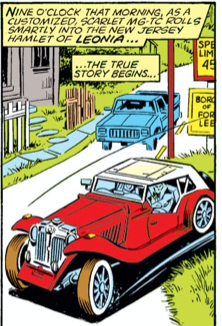 Vision and the Scarlet Witch #1 (1985) by Steve Englehart

In the scene where Jimmy Woo and Dr. Darcy Lewis are announcing the names of the townsfolk who have been cast as actors by Wanda, Abilash Tanden is said to play Norm, Vision’s friend at work. The name Norm is a nod to that same comic series, Vision and the Scarlet Witch. In that series, Norm is the name of the person who sells Wanda and Vision their new home in Leonia but also stirs up trouble later on by being in an affair with Pietro’s wife, Crystal. One can compare the fact that in the comics, Norm stirs up trouble for Wanda and Vision as he does in the show in the next episode by being the first to be awakened from his role in the show and exposing Wanda, but that’s for next week. 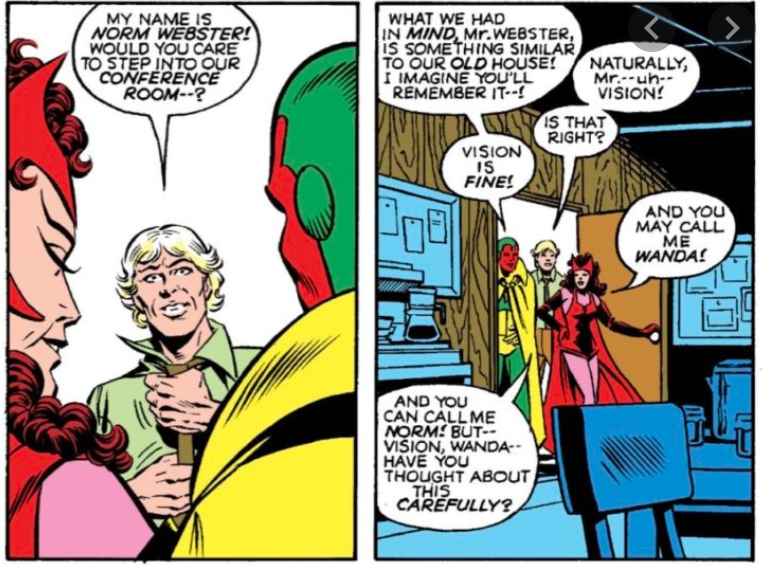 Vision and the Scarlet Witch #1 (1985) by Steve Englehart