It might surprise you that some of the same techniques used in comics today were employed in centuries-old works. An example of this is the Bayeux Tapestry, a 70-meter long embroidered masterpiece telling the story of William of Normandy’s conquest of England in 1066. The tapestry was crafted in the 11th century (probably by women!). Despite the materials used and its medieval conception, it may very well be considered a comic. Let’s take a closer look.

On a basic level, comics are a storytelling medium which use sequential art, often accompanied by text. While this definition is far from comprehensive, it provides a solid baseline for looking at the Bayeux Tapestry as a comic. Take, for example, this section here: 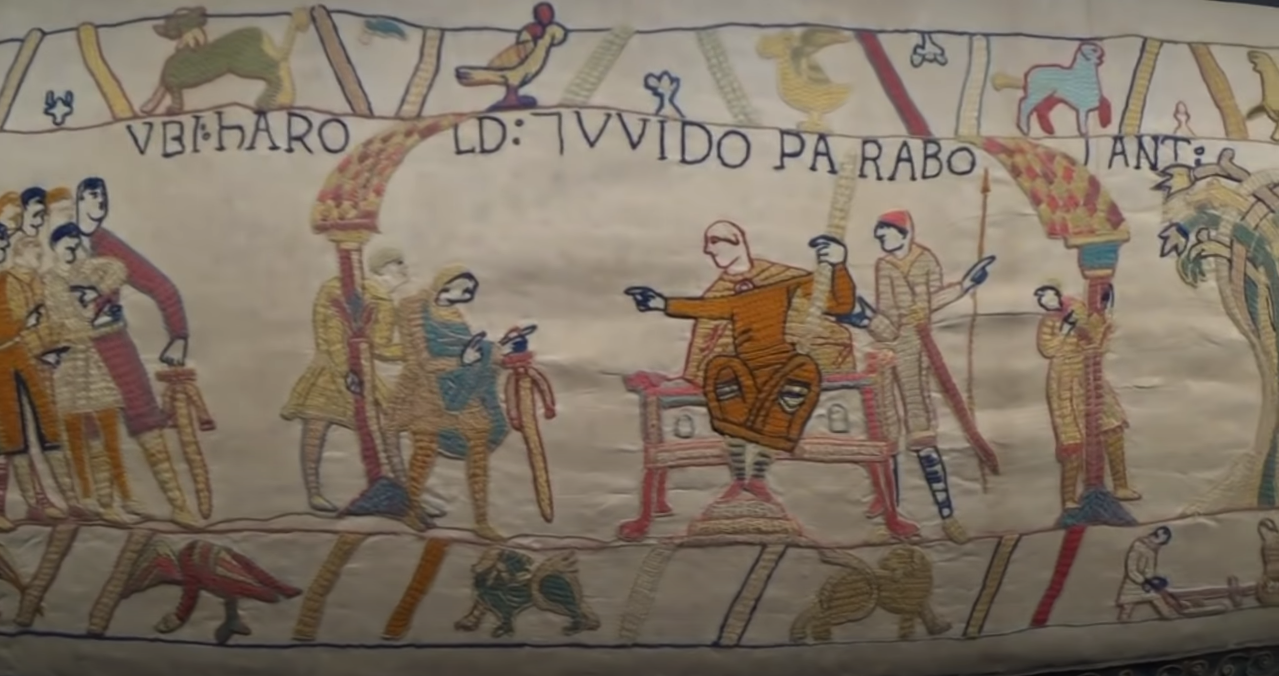 In this section alone, many elements of comics are present. To begin, throughout the tapestry, text is integrated as an explanation for what the images depict. This is common practice in comics; imagine, for example, that a text box encompasses the lettering: 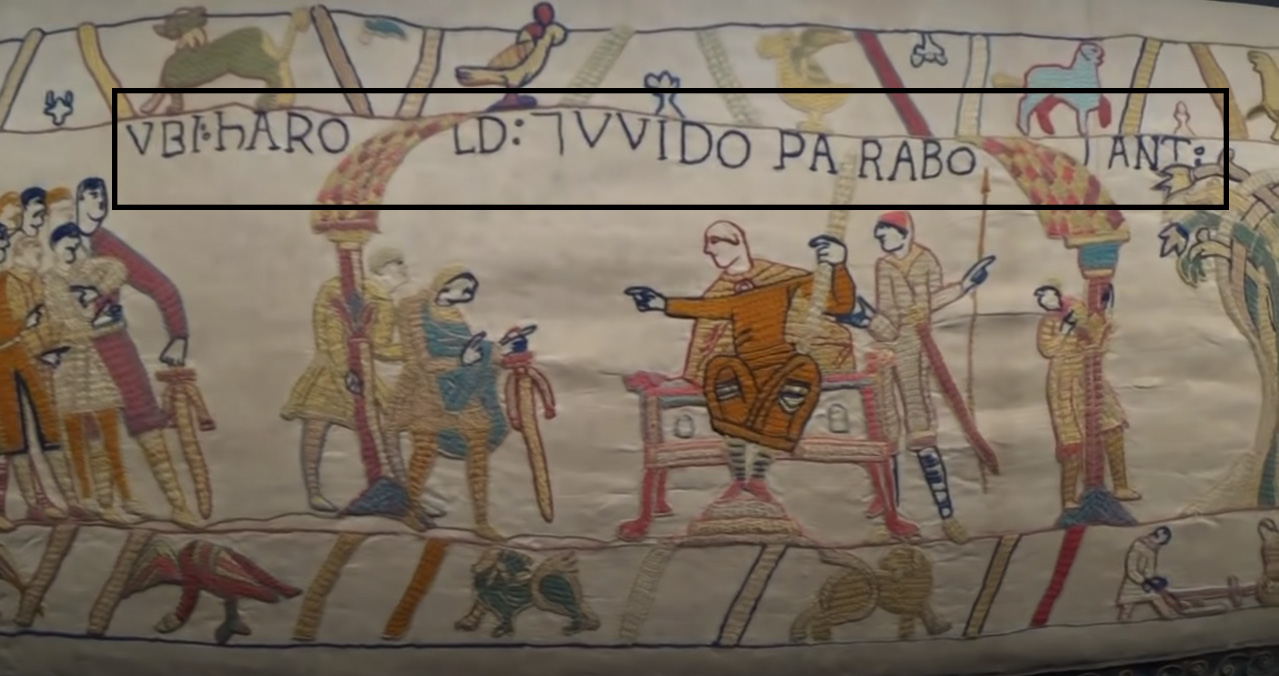 Right out of a comic book page, isn’t it? Perhaps not quite, but the similarities are quite clear. However, there are even more parallels to be drawn between the Bayeux Tapestry and modern comics. Look to the tree at the edge of the image: 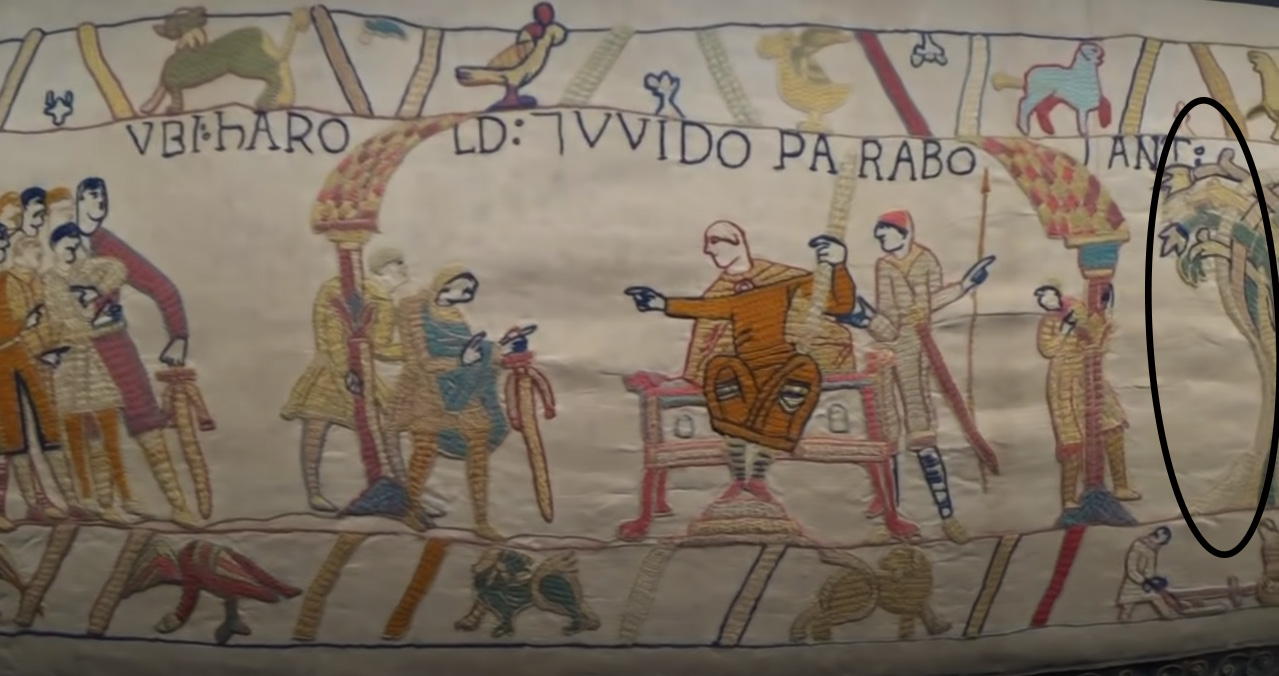 Trees such as these create breaks between scenes, and combined with the borders framing the scene they divide the tapestry into panels. Using this format, the tapestry tells a long and complex story with clear delineation between its parts, just as comics would.

Organizational methods are not the only similarities that the Bayeux Tapestry holds to comics, however. There are also parallels to be drawn on an artistic level, in regards to the comics technique of graphic weight. Graphic weight refers to the quality of drawing the viewers’ eyes, commanding their attention towards a particular aspect of the work through various techniques. One of the primary ways that the tapestry creates this graphic weight is through color. Out of all the figures in this section, the figures who draw the most attention are the central characters, clad in vibrant orange and blue. These bright colors make the two stand out, and intentionally so; they are nobility and notable figures in the story the tapestry tells. This technique is one seen throughout modern comics, and is perhaps one of its hallmarks. Would Spider-Man, Superman, and the myriad other characters the medium is known for stand out quite as much without their vibrant costumes of bright reds, blues, and other colors? Because of this aspect of their design, they draw the eye to them, lending them graphic weight; the Bayeux Tapestry does the same.

Whether one considers the Bayeux Tapestry a historic comic or not, it uses many of the techniques employed today in the graphic medium. Additionally, the terms for talking about modern comics help us see in the Bayeux Tapestry what we might otherwise miss. Through the integration of text and image to tell a story, the division of time through the usage of a panel-like structure, and the graphic weight attributed to important figures in the work, a strong case can be made to say that the tapestry is, in fact, a comic. If that’s so, it certainly goes to show how impactful the medium has been, how it stood the test of time, and how the formal vocabulary helps us to more fully read the work.