Sabrina the Teenage Witch has been through many iterations since its first issue launched in 1971, including several lines of comics and television shows. The characters from the original run of the comics continue to exist in some form through the different incarnations. Two of those characters are Sabrina’s aunts: Zelda and Hilda.

In Sabrina The Teenage Witch, Issue #6 (1971), Zelda and Hilda try to set Sabrina up with a warlock in order to correct her bad habit of being nice to other people. The character designs fit what the stereotypes of a witch would be. Large floppy hats, drab colored cloaks; all framed by the large bubbling cauldron and hefty spell-book.

Her aunts take up the role of traditional witches on their quest to uphold witchcraft – in all of its wickedness. Hilda especially casts spells to mess with Sabrina’s friends, and to make life harder for others. 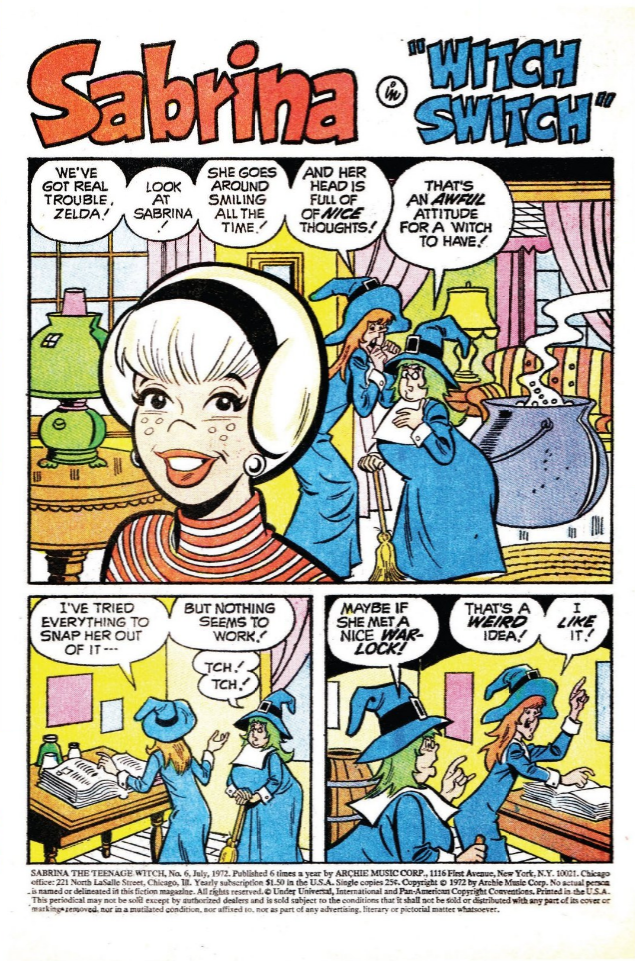 Almost fifty years later, in the 2019 run of the comic, Zelda and Hilda take on a more modern approach to witchcraft. The hats and robes are replaced by modern clothes and the kitchen has a retro-remodel. Instead of the two of them pushing Sabrina to embrace wickedness, they embody a more lighthearted take on witches. Hilda prepares food, and later slips Sabrina a secret poptart. And Zelda brews Sabrina a protection drink (as gross as Sabrina and Hilda find it). 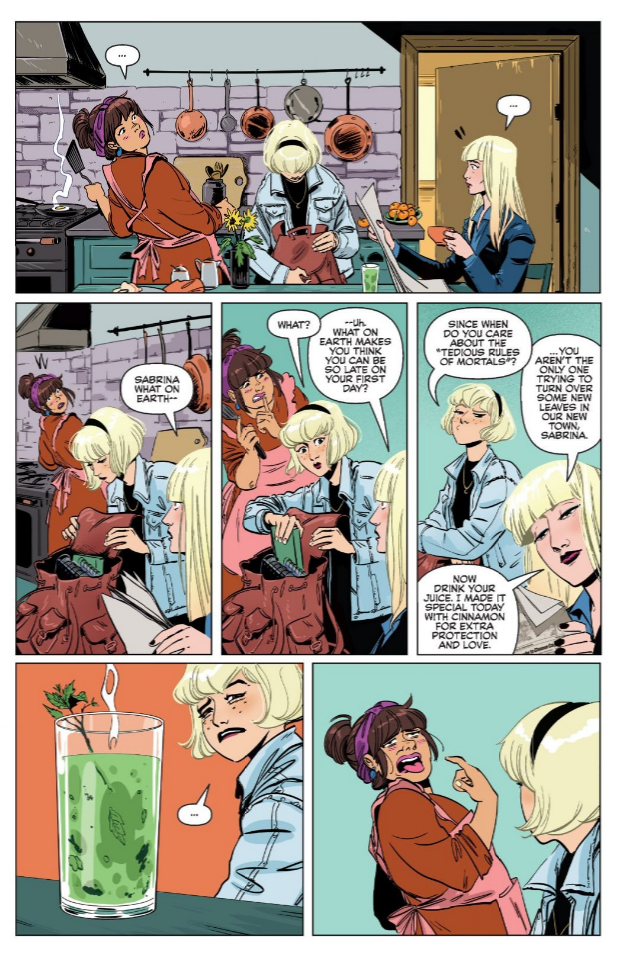 However, once they descend into their witchy workshop, they go from “regular” aunts, to aunts who do magic and ignore the rules of reality. In order to defend their town, Zelda and Hilda lead Sabrina down into a magical workshop, armory mixture, where, in contrast to their lighthearted tone of the first meeting, they are both serious and firm. The shift in the perception of witches is more than just in appearance and demeanor. But also in the way that magic is done. 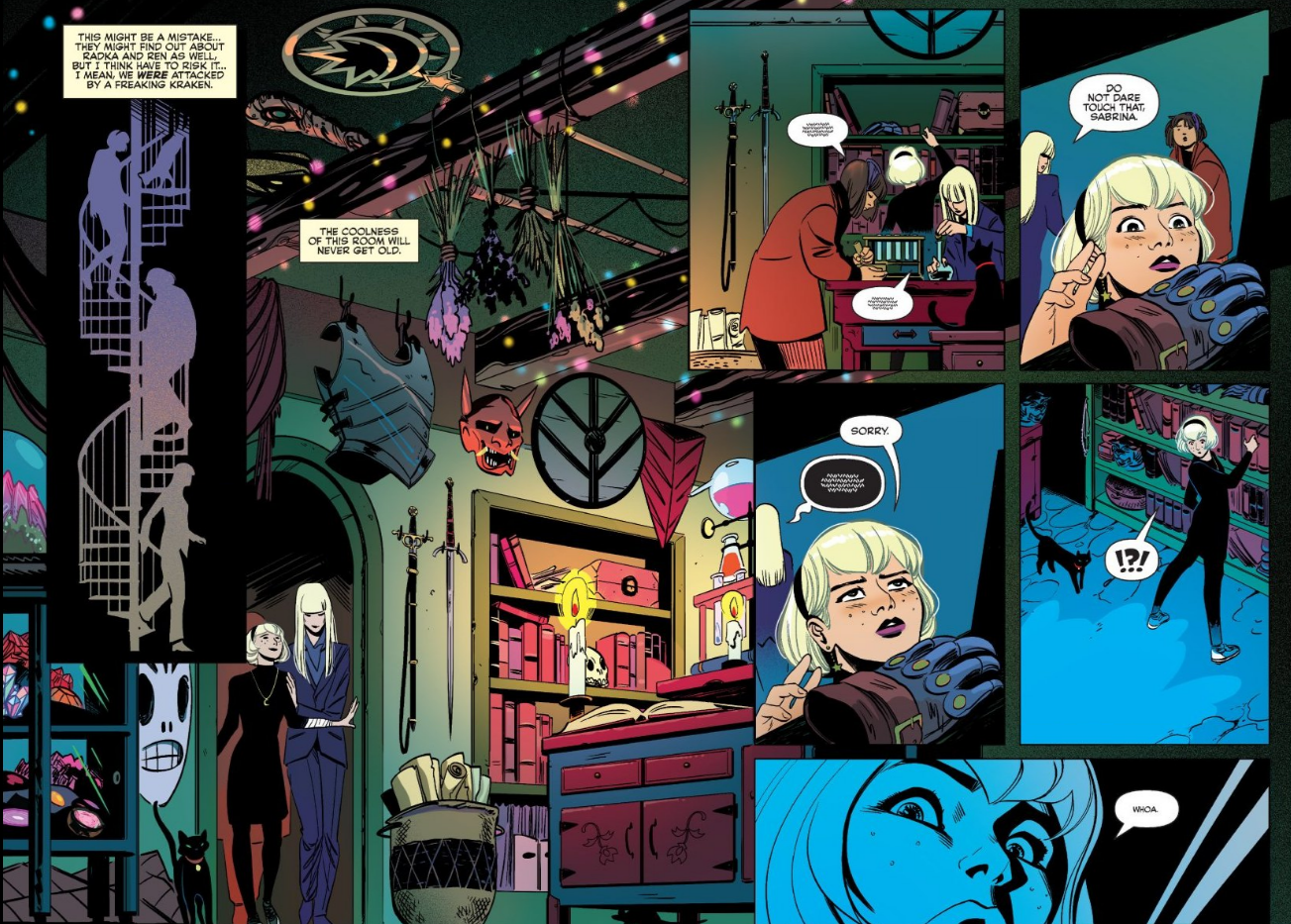 Zelda adds extra cinnamon to Sabrina’s drink, a spice that represents protection and love, and there are herbs and spices hanging out to dry. Instead of the large cauldron from the 1971 kitchen, there is a modern chemistry set and a mortar and pestle. The room where the aunts work on their magic resembles almost an armory; full of staves, masks, artifacts, and spellbooks. So how did we get this departure from a stereotypical witch with a floppy hat, obsessed with wickedness, to two aunts who blend magic into smoothies and have a magical armory under their house?

In the nearly fifty years between these iterations of Sabrina, there have been several shifts in how witches are viewed, as well as a resurgence of witches in media; be they in comic form or in television shows and movies and books. Many of these depictions have been positive in nature. Even though we can only infer what the specific writers may have thought of Sabrina’s aunts, we can also see that their ideas may have influenced and been influenced by public opinion at the time.

How will Sabrina, and other witches in media change over time? I am interested in how future iterations of Sabrina will look; both in comic form and the other media that it has been translated into, and how perceptions of witches could change how that looks.